“Never let a crisis go to waste” is a quote attributed to Winston Churchill as the world emerged from World War II. Sometimes a severe challenge such as COVID-19 can cause some to shift paradigms: how they view their world…even at a country inn. Maybe it’s getting around to things we always wanted to do; maybe it’s totally new.

In the former category, since our restaurant has had reduced hours and mandated capacity restrictions, we’ve been able to refinish the floors in a number of our dining venues while also restoring the bar top to its original luster. We are lucky to have Dale, our talented and versatile maintenance manager, put his skills to work. Everything looks like new. 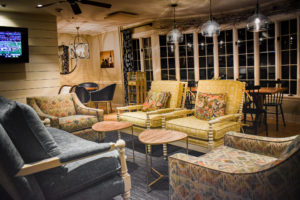 In the latter category, we’ve re-imagined our original Dining Room into a multi-purpose space. Now our guests can eat, drink, work, meet, watch TV, or all of the above. We ran a contest to name the new space, and the winner was “The Newhart Room.” Where did that come from? Media sources have it that The Norwich Inn and the Town of Norwich were the inspiration behind the popular TV Show, “Newhart,” an eight-season, Golden Globe-nominated sitcom featuring Bob Newhart.

The Norwich Inn has always had seasonal al fresco dining. While it had been popular, the surge in demand for the outdoors caused us to re-evaluate how to enhance and broaden the space. First, a sail cover was installed over our Patio, decorated with string lights. Second, we opened our Beer Garden to foodservice. Between the two venues, The Norwich Inn now has the most ample outdoor dining capacity in the area.

On tap for the 2021 season is a total redo and expansion of the Patio with upgraded coverage and new heaters.

While “COVID era” challenges have been daunting, it has caused us to rethink what we do to increase our relevance and enhance the guest experience.

To learn more about the historic Norwich Inn, please visit us online.

Support a Historic Microbrewery in Vermont during COVID-19 As Americans strongly surge together through the peak of one of the worst global pandemics in history, it’s hard not to peer ahead to a time of normalcy. One thing is for sure: Coronavirus will change the way that we travel in the coming months, perhaps years. Many folks will trade their first-class tickets for a road trip to scenic, slightly remote destinations, such as quiet Norwich, VT, and neighboring Hanover, NH, home to Dartmouth College. In the meantime, however, millions of businesses in the hospitality industry are hurting in a variety of ways. Hotels, restaurateurs, and brewers patiently wait for the curve to officially flatten, thus, bringing new life into the Upper Valley. As you might imagine, The Norwich Inn’s Jasper Murdock Ales, a historic microbrewery in Vermont, has a massive surplus of craft beer that needs a new home. As you may have seen in a recent Facebook post, the brewing team at Jasper Murdock Ales is hoping to move a large amount of flavorful craft beer into the hands of New England’s thirstiest residents. With our restaurants closed, our beer surplus is quite substantial. Therefore, we’re offering outrageous savings on just about every label, including our very first New England-style IPA, “It’s About Time.” And, of course, there’s never been a more appropriate time than right now to savor a bomber or growler of tasty craft beer with family or friends. We recommend browsing through our current inventory before heading to this historic microbrewery in Vermont. You’ll notice that, on tap, we have our classic “Whistling Pig Red Ale,” multiple stouts, an English Civil War-era mild ale, a Double IPA, and many more delicious concoctions. Keep reading to learn more about these savings.

The Norwich Inn: A Historic Microbrewery in Vermont

We cannot begin to thank the community enough for the support that we have received from people purchasing our beer and cheese over the past six weeks. We ran out of growlers for a little while, but they are, of course, now back in stock! The Norwich Inn’s guest rooms remain open for particular circumstances associated with providing accommodations for health care workers or other workers deemed necessary to support public health, public safety, or critical infrastructure. Such reservations need to be made via telephone at 802-649-1143.

Overnight hotel guests will have the ability to order delivery or takeout from several local restaurants. We can begin to take reservations for other guests after June 15, 2020. As this may change, please check NorwichInn.com before booking or calling the inn. Please don’t hesitate to learn more about our many summer specials here at The Norwich Inn, home to a historic, inviting microbrewery in Vermont’s Upper Valley.